Skip to content
You are here
Home > IN THE NEWS > Cheetah with 9 cubs?

Depending on your sources, between 80 to 90% of cheetah cubs do not reach adulthood…as in leave their mother’s protection alive.

The cheetah I observed over three days had given birth to seven cubs. Over two consecutive days she had, according to our guide, lost two to a hyena whilst she was out hunting. The cubs were under a month old.

There are some cheetahs on the Namiri Plains of the Serengeti who have yet to raise any cubs to adulthood, but this cheetah was known as a good mother.  She decided the only way to defeat this hyena (and hyenas in general) was to regularly relocate her cubs. 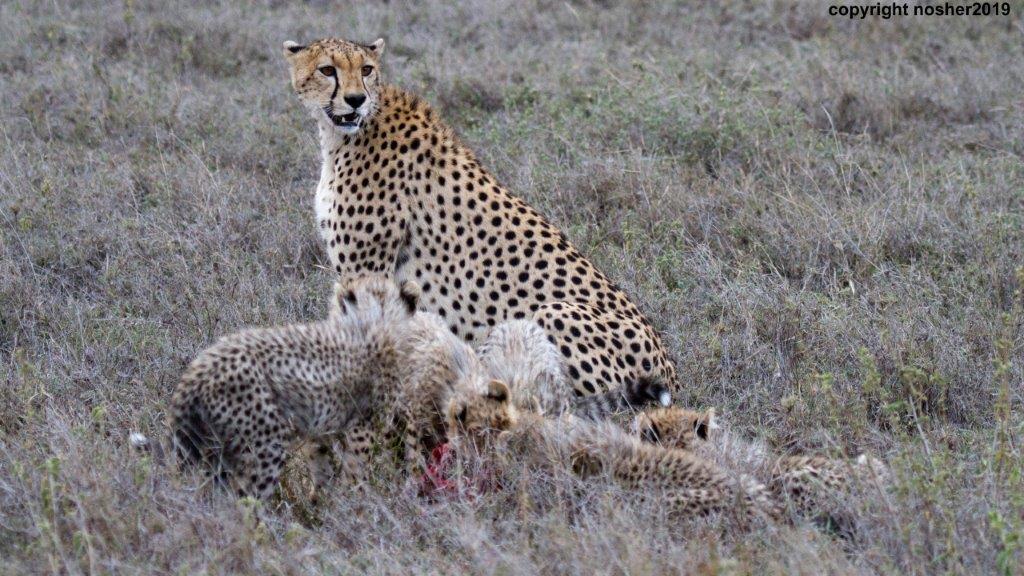 The five surviving cubs continued to grow and, at around two months old, along with their mother, met another female with four cubs of perhaps a week older than her five. The two adults are in fact mother and daughter, non-aggressive but with no long-lost reunion lion-like face rubbing—cool but polite!  The cubs, however, are nine bundles of fun-loving fur, what’s another sister or brother but an additional playmate to tumble about with?

When the daughter departs, the one with four cubs, she leaves with only three of them; one has decided to stay with grandmother!  One of the many reasons I keep returning to Africa on safari is that there is always something unexpected or new to learn about or witness.

So, our mother (or grandmother) now has six cubs to raise and they are now three months old and still exceedingly playful as well as vulnerable.  On my first sighting, she was hiding her cubs from a not too distant lioness. Later that day, we observed how she placed her cubs whilst hunting, near but not near enough to disturb the hunt.  Though we did not see her actual successful kill we did arrive whilst the cubs were still playing with the dead Thompson’s gazelle with the mother panting heavily from the exertion.  Eventually the cubs started to eat, bloodied faces looking up now and then. 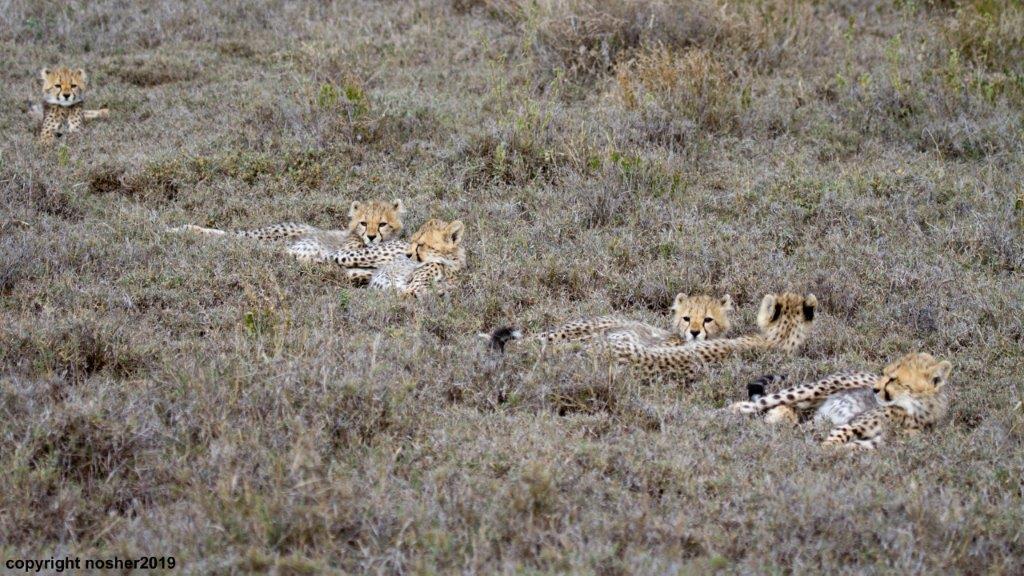 The wind was all wrong, however, and a hyena appeared on the horizon. We all expected the mother to immediately lead her cubs away to safety, leaving the gazelle to the hyena.  Not immediately, that’s for sure.

She encouraged her cubs to continue eating and actually had her own first bites of the gazelle. When the hyena’s approach was too close, she not only gave chase but actually gave the hyena a broadside across its rump with her paw, causing it to yelp and move away; to sit mournfully at some distance.

The mother and cubs returned to their food, but how much more they actually got to consume I don’t know as darkness was descending and we had to be back in camp by 7pm.  However, I am pleased to report that the mother and mischievous cubs were all alive and well the next morning.

May this mother courage continue to raise more cubs than your average cheetah mother.

Return of cheetahs to Free State in South Africa

Witnessing a kill on safari in Africa