Skip to content
You are here
Home > IN THE NEWS > Does Your Dog Have A Chicken Allergy?

Is it the chicken in your dog’s food that’s causing them to itch like crazy — or is it the pollen on your grass, flea bites, stress or none of the above? Food allergies in dogs can be tricky, as the symptoms often resemble many other medical issues. So does your dog have a chicken allergy, or is it something else? Here’s how to get to the bottom of your dog’s symptoms.

If you have a chronically itchy dog on your hands, allergies should be high on your list of possible culprits. Itching — either localized or general — is a common symptom of all types of allergies in dogs (along with other medical issues). And it’s typically not an easy path to identify the source.

“Unfortunately, allergies are quite common in dogs of all breeds and backgrounds,” according to VCA Hospitals. “Most allergies appear after the pet is six months of age with the majority of affected dogs over age one or two.” Allergies can come from several origins — including environmental triggers (pollen, plants, mold, etc.), insects (flea bites, bee stings) and certain ingredients in dog food. Further complicating matters, “affected dogs will often react to several allergens and often experience concurrent flea or food allergies,” VCA Hospitals says.

If your dog has chronic symptoms (versus seasonal flares), food allergies should be a consideration. “Food allergies occur when an animal’s immune system misidentifies a protein from a food as an invader rather than a food item and mounts an immune response,” according to the Cummings Veterinary Medical Center at Tufts University.

The overall percentage of dogs with true food allergies is relatively low, especially compared to those who have environmental allergies. But there are certain ingredients that are more strongly associated with allergies — including chicken, beef, dairy and eggs.

“There is nothing particularly special about these ingredients other than they have been the most common ingredients in pet foods for the past few decades, so both cats and dogs often have been exposed to them a lot,” according to the Cummings Veterinary Medical Center. “What surprises many pet owners is that grains are actually uncommon causes of food allergies — most pets are allergic to animal proteins.”

That’s not to say some animals can’t be allergic to certain grains and other plant ingredients. But it’s less common than the folks who market pet food would have you believe. Moreover, a diet with a less-common protein — such as duck instead of chicken — won’t prevent an allergy. “It just makes it likely that if your pet develops one, it will be to that protein instead of something more common like pork or chicken,” the Cummings Veterinary Medical Center says. 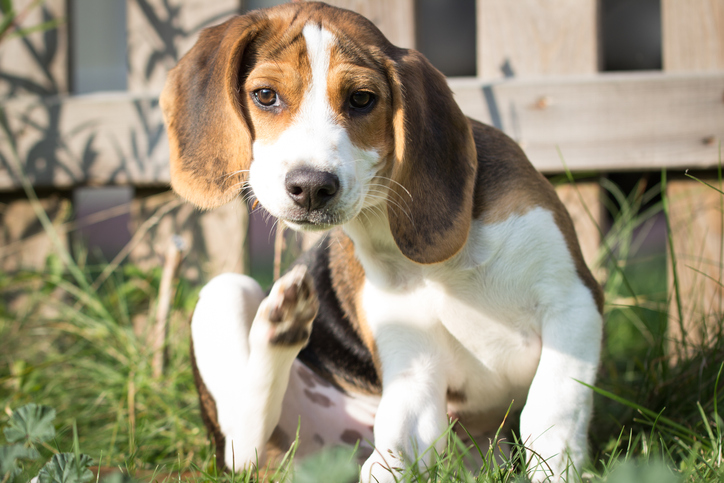 So how do you know whether your dog has a food allergy? First, it’s critical to have a veterinarian check your dog if they’re experiencing symptoms to rule out other problems. Parasites, infections and many other conditions all can cause the skin and gastrointestinal issues that mimic allergies. So don’t immediately dive into changing your dog’s food until you’re sure that’s the course of action you need to take.

Still, it’s important to recognize when symptoms might signal a problem with your dog’s food. According to PetMD, these are some common symptoms of food allergies in dogs.

Symptoms can develop at any age but often begin when the dog is young. And they don’t respond well to medical treatments, though certain remedies can be used to help control symptoms as you’re working out the underlying cause.

Furthermore, it’s important to be able to distinguish between a food allergy and a food intolerance. “The terms ‘allergy’ and ‘hypersensitivity’ describe an immunologic reaction to food allergens and requires previous exposure to the allergen to bring about symptoms,” PetMD says. “In contrast, a food ‘intolerance’ does not involve the immune system and can occur with the first exposure to a certain food.”

With an intolerance, the food just doesn’t agree with your specific dog. For example, it might have too much fiber, causing them gastrointestinal issues. But because the symptoms of an allergy and an intolerance can be so similar, it often takes a vet to determine what you’re dealing with. 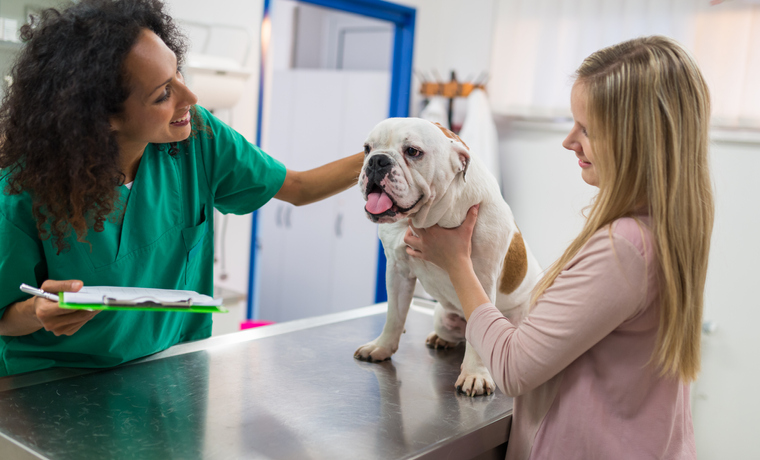 If you suspect your dog is allergic to chicken or any other ingredient in their food, the hard work is just beginning. “One of the most frustrating things about food allergies is that there really isn’t an easy test,” the Cummings Veterinary Medical Center says. Tests do exist that claim they can diagnose food allergies using your dog’s hair, blood or saliva. But research has shown them to be pretty inaccurate — and consequently they probably won’t be very helpful (or economical) for you or your dog.

“The ‘gold standard’ or best method that we currently have for diagnosing food allergies is the dietary elimination trial,” according to the Cummings Veterinary Medical Center. And there are two ways to go about this: using a “novel” diet or a hydrolyzed diet.

The novel diet should contain ingredients your dog has never eaten before — namely the protein source — “thereby reducing the chance of an immune response,” according to PetMD. “In addition, the diet should contain a novel, single source of carbohydrates since plants also contain protein.” For instance, if you’ve been feeding a dog food with chicken, try a food with a less common protein, such as venison — as long as it also doesn’t have chicken on the ingredients list and your dog hasn’t been exposed to venison before.

Or you could go the hydrolyzed route. “Hydrolyzed diets are made when intact animal proteins are broken down into very small molecules that the immune system should not be able to recognize as allergens, virtually eliminating the possibility of an adverse food reaction,” PetMD says. These diets also tend to use carbohydrate sources, such as rice, that aren’t typically associated with allergic reactions in dogs.

Keep your dog on this diet for at least eight to 10 weeks — or whatever your vet recommends. “Most dogs experience at least a partial improvement in their food allergy symptoms within the first 4-6 weeks, but several dog breeds (including Labrador Retrievers and Cocker Spaniels) may require a longer period of time to respond,” according to PetMD. It’s absolutely imperative that this special diet is the only food your dog eats during this time. So cut out any treats or table food that don’t comply. Plus, check the ingredients on any medications — such as heartworm chews — for conflicts, and ask your vet for guidance if necessary.

If you see signs of improvement after giving this trial diet enough time to work, then it’s time for a test to verify the results. Switch back to your dog’s old diet, and monitor to see whether any allergy symptoms return.

“A quick relapse is suggestive of an allergy to an ingredient in the old diet,” the Cummings Veterinary Medical Center says. “You then go back to the test diet until things get better again before trying one ingredient from the old diet at a time until you identify the specific foods that trigger the problem.” For instance, if you think chicken is the trigger, add some pieces to your dog’s test diet while they are asymptomatic to see whether it causes a reaction.

It can be tempting to skip that last step if your dog is doing well on the trial diet. But if you don’t pinpoint the ingredient, you’ll never truly know whether the food made the difference or it was a coincidence — and something like a change of seasons actually was the culprit. Of course, always follow your vet’s recommendations on what they think is best for your dog’s needs.

Does Your Dog Have A Chicken Allergy?

10 Diseases You Can Get From A Dog Or Cat

Why Is My Dog Walking In Circles?

You only get 60-70% chicken as a South African consumer